Currently, pathogenic microorganisms are characterized for antimicrobial susceptibility on culture positive samples via growth in multiple wells with varying concentrations of different antimicrobials.  This approach is very robust, and measures the “functional antimicrobial susceptibility AST” (the gold standard, according to clinicians) but is also very slow.
Some emerging techniques use rapid PCR type methods to characterize the presence of specific markers associated with resistance.  This approach is somewhat faster, but more expensive.  But it is also problematic in that this approach does not cover all known markers for resistance, not all resistance mechanisms have a known marker, and new resistance mechanisms are constantly emerging.
Other approaches speed up the process on a “post culture positive” sample by using accelerated methods (such as advanced imaging) to characterize bacteria growth.  These are all incremental improvements because functional AST characterization still requires a culture positive sample, and many hours of testing after that.  Our approach is the first (and to our knowledge, the only) one that can characterize the functional AST of the pathogen without requiring a culture step, and without requiring hours of testing.

Our proprietary reagent combines a color changing reagent that responds to bacterial metabolic activity, and to certain specific enzymes produced by some bacteria.  The amplification scheme enables a signal whose magnitude scales with pathogen concentration, with a lower limit of 100 CFU/mL (when adding 50 micro-liters of the test sample, with about 5 CFU in each test sample), as shown  below.  We use this output to develop a quantitative diagnosis on pathogen concentration that is good to within a factor of 5. 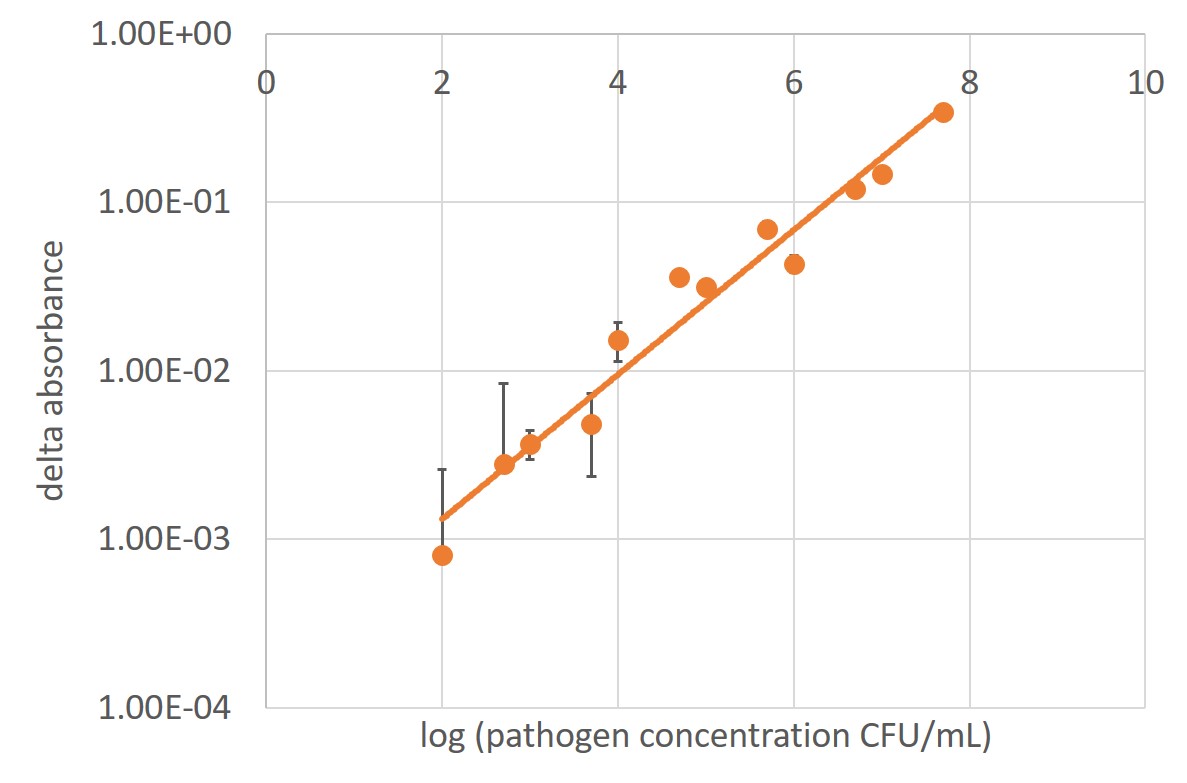 We characterize the metabolic activity of the causative pathogen, and then repeat those measurements with varying amounts of antimicrobial.  The result is a rapid characterization of the MIC (Minimum Inhibitory Concentration MIC).  We have found that the value of this MIC developed by the rapid test corresponds to the MIC developed by the standard, culture based method (as defined in the CLSI M100 standards document) to within a factor of 2, which is the acceptable dilution criterion on the CLSI standard.

For urine samples, the testing can be initiated directly on the test sample without any incubation.  Normally, these measurements require several hours and a starting bacteria concentration of about 1000,000 CFU/mL.  Our proprietary reagent enables this measurements in 20 minutes from as little as 100 CFU/mL.

We subclassify the pathogen based on the production of certain enzymes (which our reagent recognizes), and on the response of that causative pathogen to different media.